All automated system emails send from the BrandChamp platform use a single email layout, unless overridden for individual system emails (see below).
You can see which layout is currently used by going to the Emails -> Layouts area and seeing which layout has a tick in the "Use for all system emails" column:

You can change which layout is used by clicking the "select" link in the desired layout row.
That will pop up a window that will show you a preview of how the layout looks before you confirm the change: 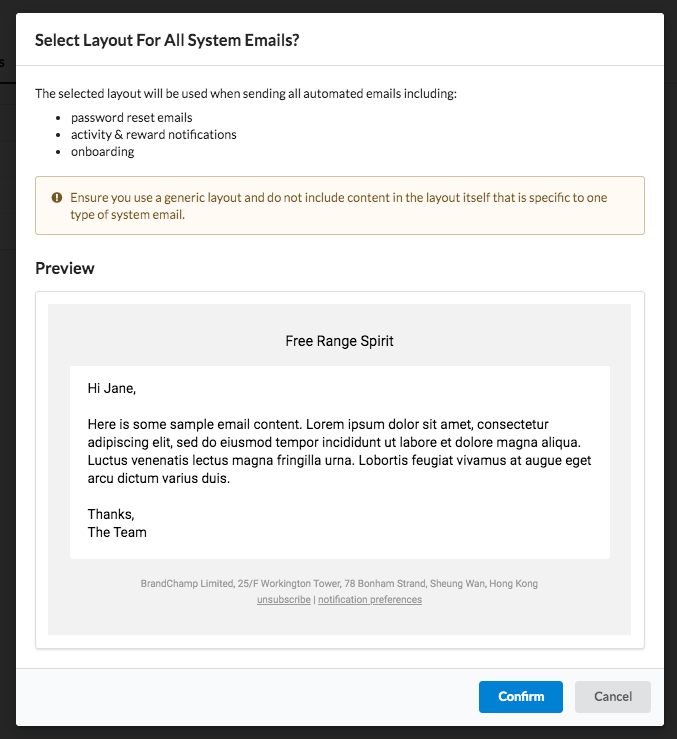 Important! Changing that layout will change the layout used for all automated emails sent from the BrandChamp platform including email verification, password resets, activity & reward notifications, onboarding, etc. So you must ensure that the layout content is generic. It should only include basic branding and footer details - similar to how the "Default Layout" looks. Don't include any content in the layout itself that relates to any one particular system email and don't include promotional images in the footer etc.

As noted above, a single layout is normally used when sending all system emails. However you can choose to override that for the system email types listed in the Emails -> System Emails area by editing each one and choosing to import custom HTML instead:

If you import custom HTML for a particular system email, that exact HTML will be used whenever that type of system email is sent in future.

For example, you may wish to heavily customize the "Applicant Accepted" system email template. By choosing to import HTML for that system email only, you can still have a very generic email layout for all the rest of your system emails, but have full control over the look and feel of that single system email.

Note: There are other system emails which are not shown in the Emails -> System Emails area, such as password reset emails and activity notifications etc. These will always use the selected system email layout and cannot be customized further.