Auto-issued rewards are issued automatically by the system as soon as a BrandChamp selects them in the BrandChamp portal.

As such, they are only suitable for reward types which can be created automatically by the BrandChamp system such as Shopify discount codes or Shopify gift cards. All other types of rewards will be manually issued.

Note: you can also choose not to check the "Auto-issue" flag on rewards such as Shopify rewards so that they need to be manually issued also. This gives an administrator the opportunity to review each one first, but still allows them to automatically create the discount code or gift card with a single click. Manually issued rewards are the most common reward configuration.

Manually issued rewards require an administrator to review and click to issue the rewards, optionally entering a reference (such as a discount code etc) at the same time.

When a BrandChamp selects a manually issued reward in their BrandChamp portal, it goes into an "Unissued Rewards" queue for an administrator to review and issue.

The BrandChamp will receive an email after the admin issues the reward, including any reference such as a discount or gift card code.

If we set up a manually issued point reward that gives a Shopify discount in exchange for 100 points: 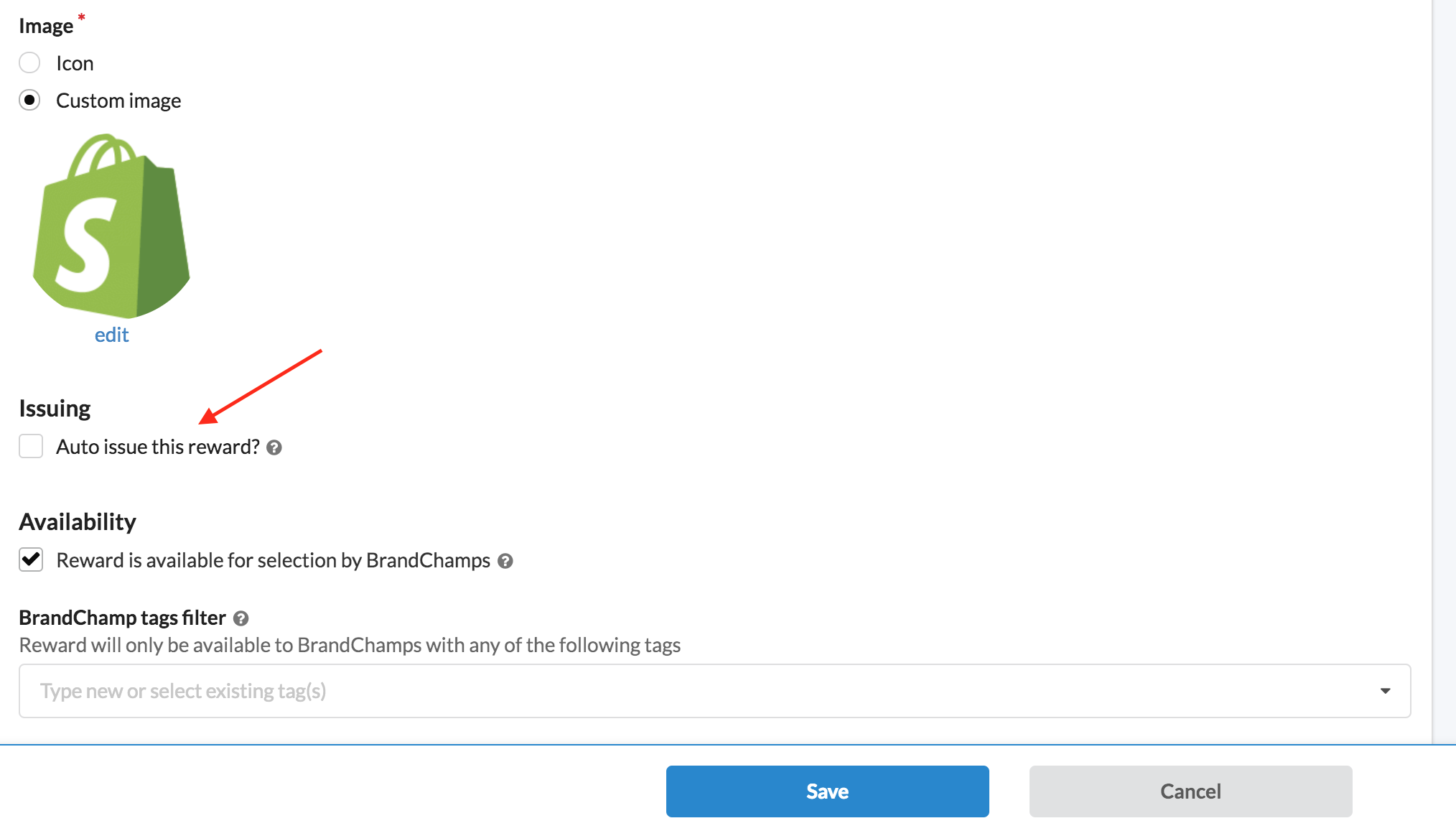 And if we have a BrandChamp with at least 100 points, they will be able to select this reward if they click the "Choose" button in the "Rewards" section of the BrandChamp portal:

They will need to click the "Review" button to confirm their selection: 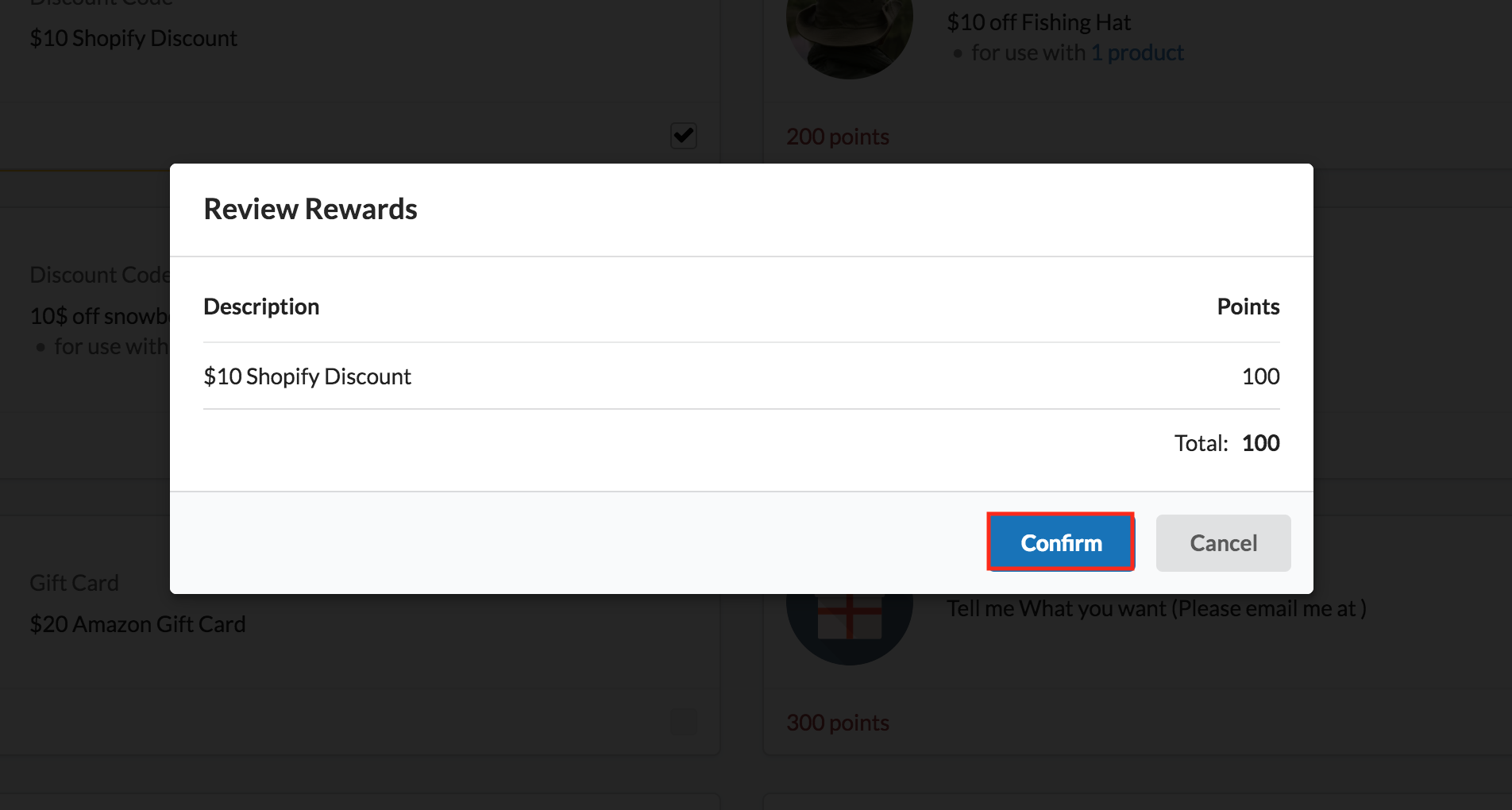 When the BrandChamp clicks "Confirm", because the reward is set up to be manually issued, the reward will go into their "Pending Rewards" section:

Back in the administrator portal, clicking on the "Rewards" link in the nav bar will show the selected, but unissued, reward to the admin:

At this point, because it's a Shopify reward (which can be automatically created by the BrandChamp system), the admin can simply click the radio button for "Create Discount in Shopify" and BrandChamp will automatically create a discount code in the Shopify store and mark the reward as issued. It can then be viewed in the "Issued" tab:

Note: The admin also has the option to enter a pre-generated discount code in the "Reference" column before clicking the "Issue" button. In this case, the system will use that instead of creating a new discount in your store. For more information on issuing pending rewards, see:

The BrandChamp will get an email (by default at 8pm on the day the reward was issued) with details of all rewards that were manually issued in the last 24 hours for them.

If the BrandChamp logs into their portal, and goes to the "Rewards" section, they will now see the issued reward:

If we edit the Reward Definition we set up above and set the reward to auto-issue: 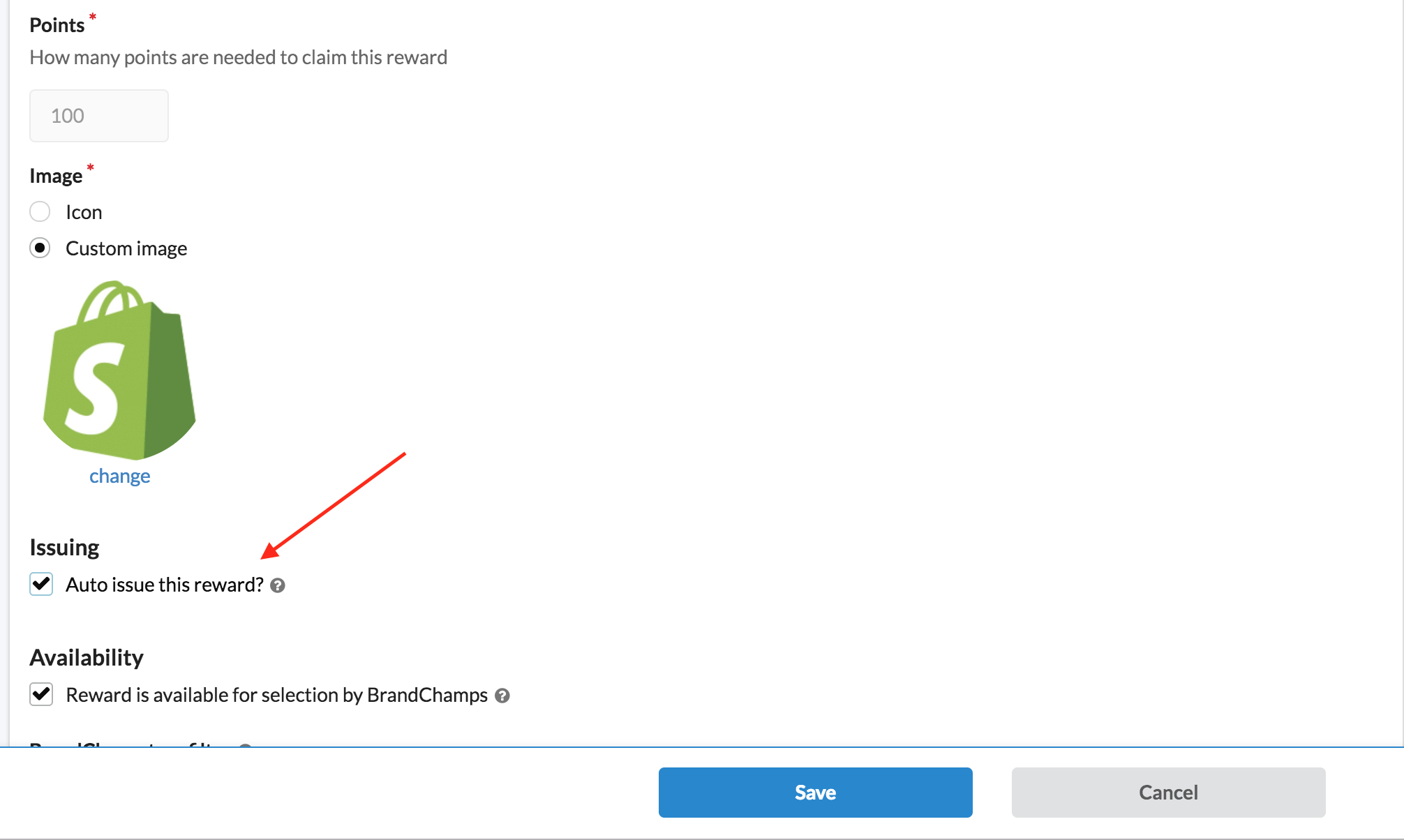 But this time when they click Confirm, the reward is immediately issued without any intervention from an administrator and they see it straight away in the "Issued Rewards" section:

Note: Because it's issued immediately and they get to see the discount code straight away, no notification emails are sent for auto-issued rewards.