Note: for more information on the different reward types and configurations available in BrandChamp, be sure to check out the Rewards section.

We can create a Point reward in the "Rewards" page under the "Reward Types" > "Point Rewards" tab: 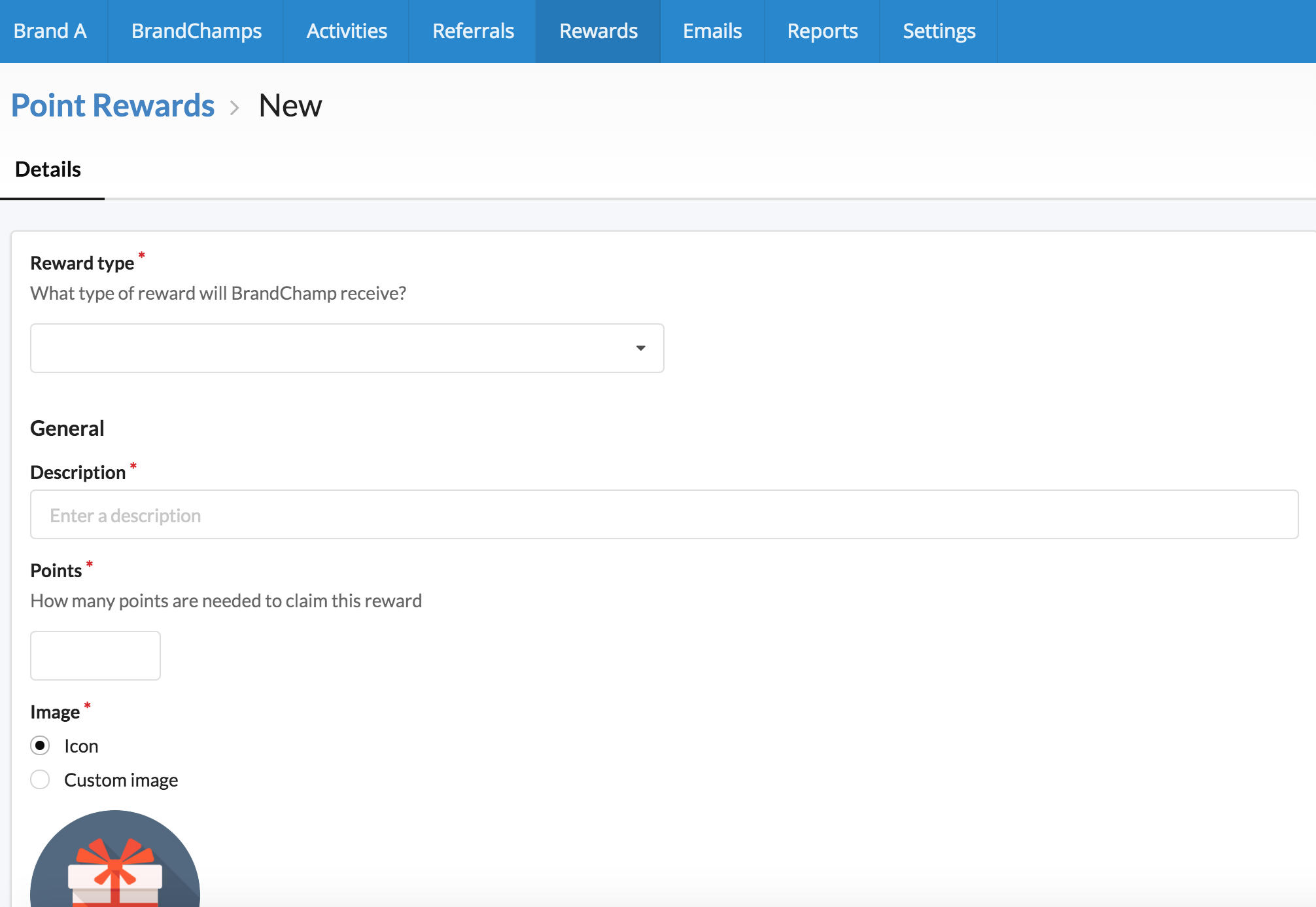 Note: this value is very low given the fact that the social media post Activity we defined earlier only gave 100 points. 50 points is used just as an example in this walk through so that when the BrandChamp earns 100 points, they have enough credit to claim one or two instances of this reward.

If you click the Reward Type dropdown, you'll see the available types of rewards that can be given to BrandChamps in exchange for the number of points we've defined: 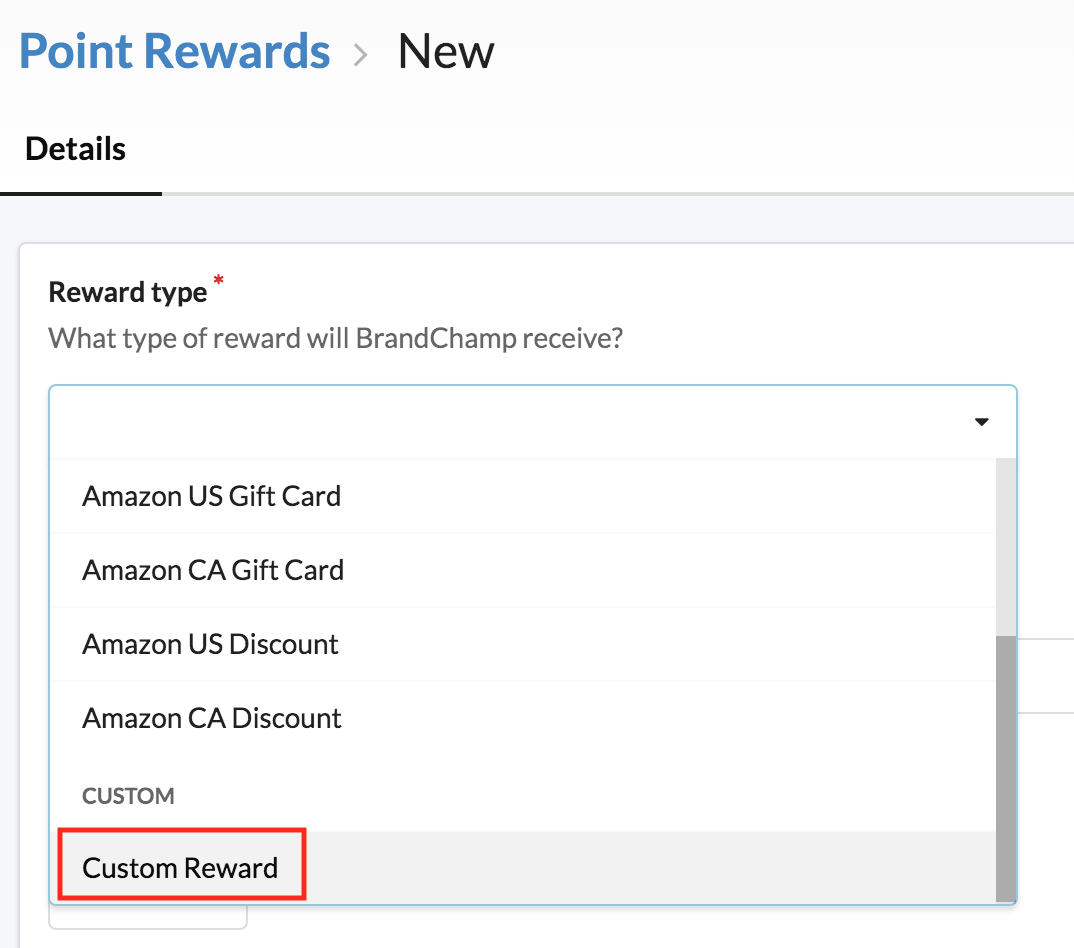 For details on the different reward types, see the Reward Types article.

For this example though, let's just pick the "Custom Reward" option. This type allows you to enter a simple free-text description of the reward:

After creating the reward description.

-Select an "Icon" or "Custom Image" for the reward

-The "Auto-issue" field is unchecked so that this reward goes into a queue of "unissued rewards" that an administrator must review and click to issue.

Before saving the reward, check the box under "Availability" to make the reward available for selection by your BrandChamps. 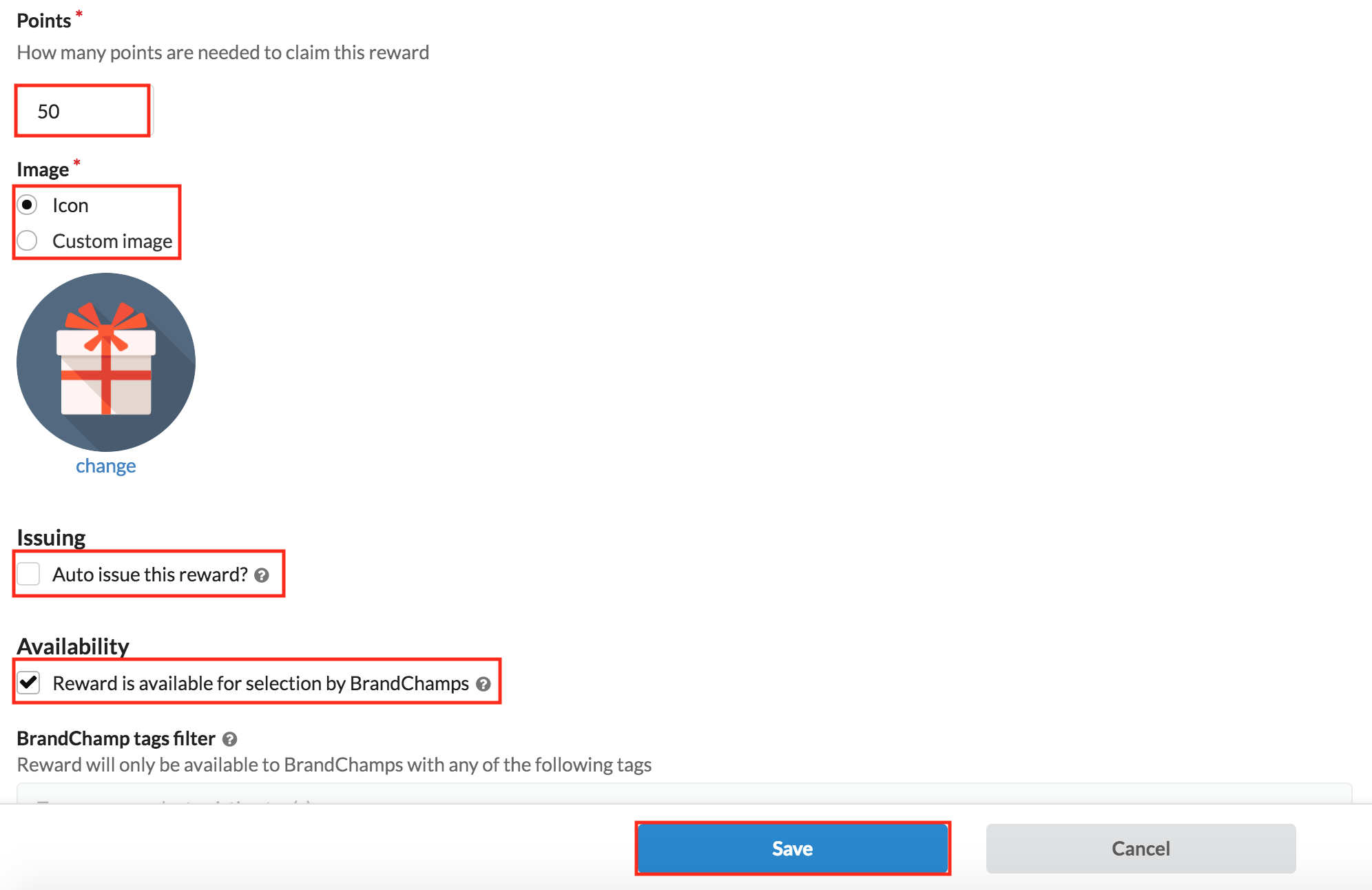 Let's go back to the BrandChamp portal and go to the "Rewards" section:

Click the reward box to choose  reward with our 100 points: 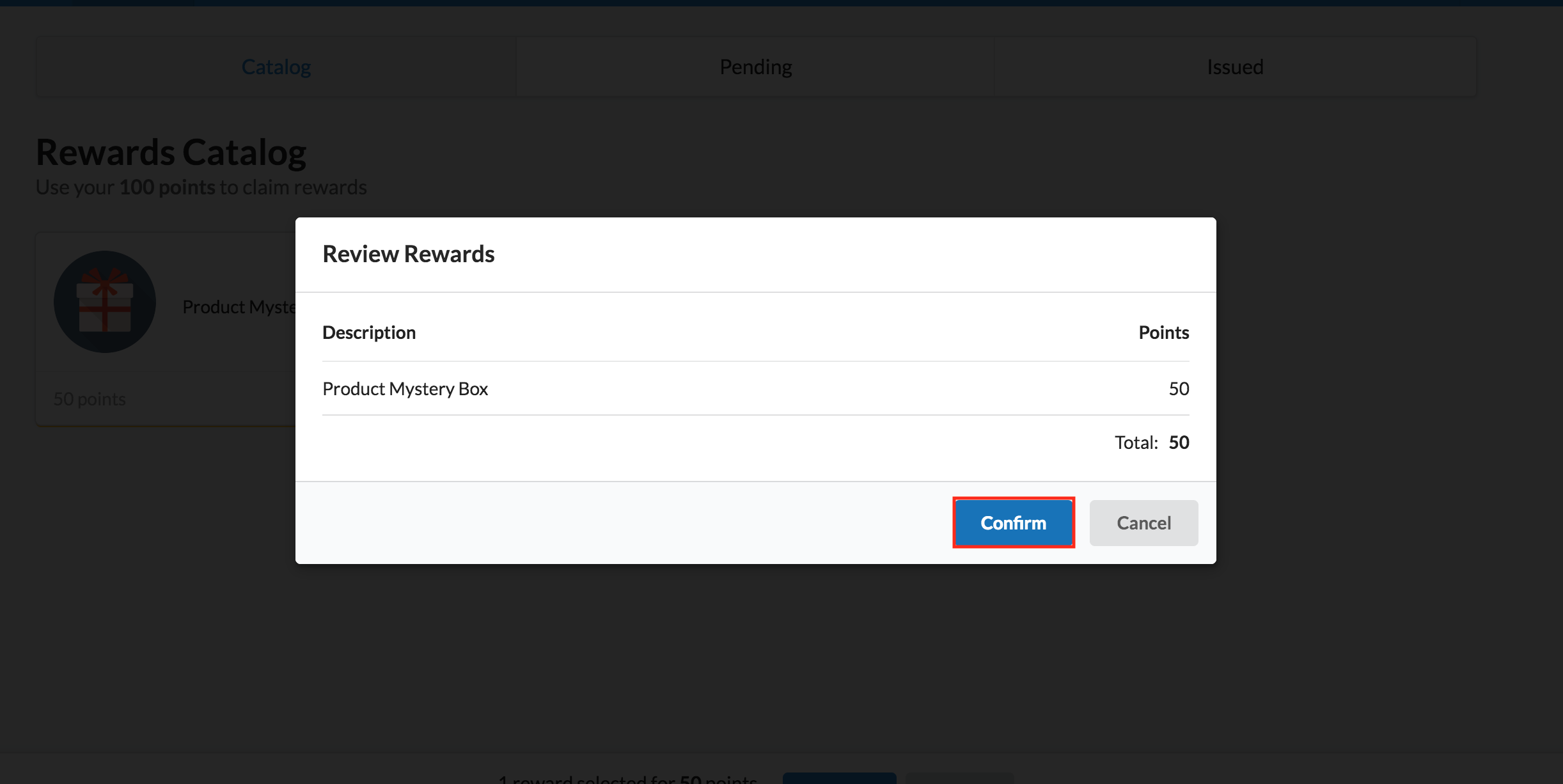 Since we didn't tick the "Auto-issue" checkbox in the reward definition, the reward will need to be manually issued by an administrator. So when the BrandChamp clicks Confirm, the reward goes into a "Pending Rewards" list:

If the reward was set up to be auto-issued (and this only really applies to rewards where the BrandChamp system can automatically create the reward itself - like Shopify discounts and gift cards), then the reward would be created and issued immediately and go straight into the "Issued Rewards" section. For more information on that, see:

But this reward selection will need to be issued by an administrator so let's see next how to do that.

Note: either selection will take you directly to the "Rewards" section and shows the "Unissued" rewards tab:

We can now see our BrandChamp-selected reward.

The "Reference" field allows us to provide the BrandChamp with information needed in order to claim the reward. For example, if this was a product discount reward type, we could enter a discount code here. As it's a Custom reward and for the sake of this walk through let's just enter "123" and click "Issue".

The reward is no longer visible in the "Unissued" tab and is now shown in the "Issued" tab:

Here we could edit the Reference field or delete the reward altogether if needed (which would credit the 50 points back to the BrandChamp).

The BrandChamp will get an email (by default at 8pm on the day the reward was issued) with details of all rewards that were manually issued in the last 24 hours for them.

If the BrandChamp logs into their portal and goes to the "Rewards" section, they will now see the issued reward along with the reference we entered:

So that's a very quick walk through of the reward flow in BrandChamp for a simple, custom reward. For much more details, see the Rewards section including: